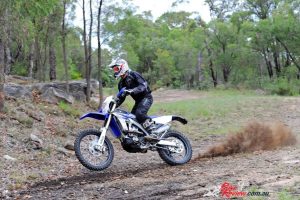 Amazingly the bike performed very well, only stalling a couple of times due to the fuel injection off the very bottom flaming out every so often – this is certainly not the bike’s intended purpose but it did exceptionally well.
In fact when cutting test laps the change of direction for a 450 was outstanding, flicking from corner to corner with ease. I would put this down to how the weight is placed in the frame and the tilted back cylinder.
Riding the 2016 Yamaha WR450F over a wide range of terrain showed that this a serious bike that will suit a huge range of riders, racers and terrain and the WR450F is well priced at $12,999 +ORC. Or for an extra $200 you can get the 60th Anniversary model in yellow for $13,199 +ORC.
ENGINE:
The completely new 2016 WR450F engine comes directly from the YZ motocrosser with the reversed cylinder and all. The front intake makes complete sense for an enduro bike, keeping the airfilter high and dry, as well as away from all that dust off the rear wheel.
Going away from the five-valve design of the past, the WR450F now runs the four-valve head with double-overhead cams matched to the Keihin fuel injection system.
With a bore and stroke of 97.0 x 60.8mm, this engine likes to rev. In saying that it also has bulk amounts of torque, so choose your riding style. The throttle-body is also 2mm larger than last year’s WR, now at 44mm making for better top-end power.
Being mated to a five-speed gearbox with slightly changed second, third, and fourth gear ratios and an all new clutch the engine is also truly enduro ready and the WR450F’s clutch has been upgraded and includes new friction plates for better feel.
The exhaust sound is crisp but not obtrusive, while the Yamaha holds just under one litre of engine oil in its wet sump. Engine power is also fully adjustable with optional Yamaha Power Tuner which is simple to use and runs on batteries. 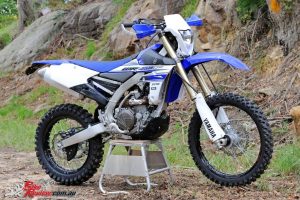 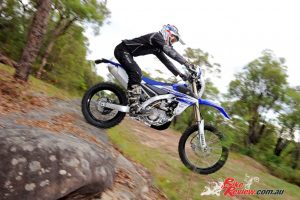