The new SuperSport hits a new balance between road rideability and racetrack agility – has Ducati found the perfect blend?
Many of us dream of riding a full-blooded superbike through our favourite bitumen twisty bits and on to the latest weekend leather-clad hangout; however, real-world practicality and scratching fantasies do not always make good bedfellows. Models such as Ducati’s 1299 Panigale may be supermodel gorgeous, but they lack everyday useability. 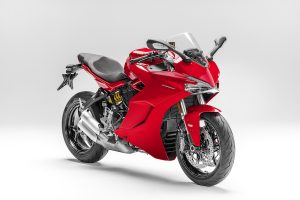 That’s not to knock people who ride their thoroughbred superbikes regularly, even commute on them daily – all power to you I say. But as the riding population grows older, an increasing number of buyers appear to be looking for a bike that delivers superbike-type performance for the road, coupled with ergonomics to suit. The answer may just be Ducati’s new SuperSport model, and if you want a little more sport in your SuperSport, then the S version will get you there.
For this new model, Ducati has resurrected the famous SuperSport name, but after riding the bike at the world launch in Sevilla, Spain, I think RoadSport would have been a more apt name. This bike delivers usable real-world sportsbike performance by the bucketload, with enough kept in reserve for the odd trackday. As it now seems to do with monotonous regularity, the Bologna-based manufacturer has filled a void in its model line-up that we didn’t even know existed.
Two facets of the SuperSport came to the fore at the launch. The base model SuperSport was put through its paces on the local roads, ranging from smooth and fast fast-flowing bends to narrow cobblestone streets of the local villages. The up-spec S model was saved for a bit of track fun at the entertainingly technical Circuito Monteblanco.
Powering both variants is Ducati’s delightfully punchy liquid-cooled 937cc Testastretta 11º V-twin. Now in its Euro 4 compliant configuration, the fuelling has been re-mapped to shift power and torque delivery lower into the rev range. According to Ducati, a whopping 80 per cent of the V-twin’s 96.7Nm of torque is available at just 3000rpm, peaking at 6500rpm, with its 83.1kW peaking at 9000rpm. These numbers sound very un-sportsbike-like, until you discover that the 916 produced roughly the same amount of power – and nobody ever called that bike a middleweight.
The standard model comes in Ducati red with a red frame and black wheels.
But why has Ducati targeted low-end grunt? This comes back to my RoadSports moniker. The new SuperSport has been designed for more frequent and extended fun time, and as it doesn’t have to comply with the rules of a racing category, there’s been no compromise on usa–bility and comfort in search of lap times. That’s not to say it doesn’t look sporty or go hard – the thing looks like it’s doing 100mph while sitting on its sidestand.
The fairing is less aggressive than on the Panigale, sitting higher and wider and without a full bellypan, but the proportions are spot on and mask the increased dimensions. The lines of the bike flow almost seamlessly from nose to tail thanks to the hidden fairing bolts, and the sleek screen gives no hint of its 50mm adjustability. The designers have also managed to cram the large catalytic converter required for Euro 4 compliance into a small and mostly hidden area, using the stubby twin-exhaust side-cans to mask some of the bulk.
As with any bike, there are a few things to nit-pick. Taking an engine from an existing model does come with its compromises, and in the case of the 937cc Testrasetta engine, it’s the plumbing around the back which can’t be hidden by the fairing. And while the fairing itself has lovely flowing curves, the thinness of the material in places gives a slight budget fe 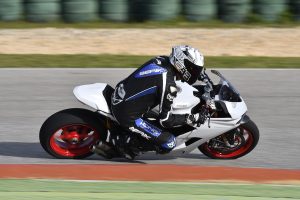 Exhaust system
The Euro 4 emissions regulations have seen some hideous looking exhaust systems appear as manufacturers search for ways to lower emissions while preventing power loss and avoiding the cost of developing a new engine. Ducati has fitted the 2-1-2 system with a large belly cat and silencer, finished off with two stacked end cans.
Electronics
There is a choice of three ride-by-wire modes: Sport, Touring and Urban. The eight-level traction control and three-level ABS can be programmed and stored within each of the three riding modes. ABS and traction control can also be disengaged but will reactivate on next ignition off/on sequence. ABS Level 1 disengages ABS to the rear wheel.
Rider info
The dash is an LCD unit in the fashionable kidney shape of current superbikes. All information is displayed as either a warning light or in a large, easy-to-read LCD font. Speed, engine revs, selected riding mode, ABS and traction control settings are all shown on the main screen.
1. Monster 821-based trellis frame harks back to the unique look of the original SuperSport model
2. ABS and TC can be deactivated, but will reactivate at the next ignition on/off sequence
3. Both models come with top-spec Brembo Monobloc M4-32 brakes
Get connected
Bluetooth
It’s taken a while for motorcycle manufacturers to embrace the idea of smartphones becoming an electronic umbilical cord between bike and rider. The optional Bluetooth module available for the Ducati SuperSport allows the rider to control the phone’s functions via handlebar-mounted switches. This keeps your hands where they are meant to be – on the handlebar. The now obligatory USB port is located under the seat.