What A Gun Machine !!
For the first time Harley-Davidson has squeezed its 110-cube Twin Cam, normally reserved for CVO models, into a Fat Boy Lo frame to create its most powerful and desirable cruiser yet.
HD Australia sales manager David Turney and “Pontiac tragic” nails it when he says it reminds him of the Pontiac GTO.
“Pontiac squeezed in the biggest motor that would fit in the chassis. It’s the same with the Fat Boy S,” he says. 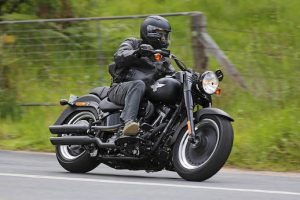 Fat Boy was the biggest seller in the Harley family in Australia for several years until it was surpassed by the Dark Custom range, then the Breakout and now the Street.
However, a resurgence in Fat Boy is now predicted with the addition of this high-powered, low-riding model.
Price is extremely attractive at $31,495 which is just $2500 more than the standard Fat Boy Lo. If you were to replace the engine of a Fat Boy with the CVO 110 (1800cc) balanced Twin Cam, it would cost you about $6000 and you wouldn’t have cruise control which is standard here.
If you look at the model designations, it’s not actually a Fat Boy (FLSTF), but a Fat Boy Lo (FLSTB). The designation is FLSTBS, which means it has the lower seat height.
The effect of being pulled along by a 110-cube Screamin’ Eagle engine with such a low seat height is like having your backside dragged along the ground by a drag racer. It’s exhilarating in the extreme!
But what about the notoriously low cornering clearance issues and the wallowing handling of the ponderous fat-tyres Fat Boy? What’s the point of squeezing a meatier engine into the same frame and suspension? Surely it will be power you can’t use!
Harley confirms that the suspension and frame are exactly the same with no tuning of springs or dampers. In fact, nothing much has changed mechanically in the Softail for the past seven years.
So we took to the famous Gold Coast hinterland and Border Ranges on the national press launch for the ultimate test of these concerns and the result was a real surprise.
A series of roundabouts led us out of the Gold Coast to the sounds of scraping floorboards on every turn.
For those who laugh at such antics, that’s fine. It is laughable … and a whole lot of fun!
You purposely touch down the floorboards and glide them along the ground, delighting school children on their way to school and scaring the commuters in their cages.
You get used to it and use it as a guide to how far you can lean. The only concern is a bump or dip in the road that can cause soft suspension to stretch the wheelbase and reduce the clearance, resulting in hardware such as pipes hitting the deck and possibly lifting the rear wheel off the ground.
It’s happened to me on several Softails in the past and it’s scary.
However, the Fat Boy S seems more rigid and firmer than before, even though Harley confirms there have been no suspension changes.
It also seems to ride better over the bumps, even though it weighs about 4kg more than the standard model.
Big hits still jar your body because of the shorter rear spring on the Lo, but it’s firm and fair, rather than bone-breaking. 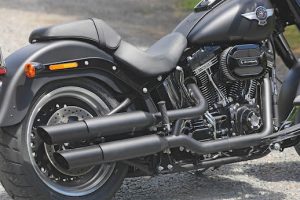 The Fat Boy S takes a little bit of effort to turn with that meaty 140mm front tyre, but the wide bars reduce the effort and keep it ultra-stable through surface irregularities.
You can also change your line easily mid-corner without feeling like you will unsettle the whole ship.
Once into the hills and the winding roads, it becomes clear that this is going to be a fun bike to punt along.
The more-powerful engine actually makes it more useful in this terrain because the engine pulls willingly from under 2000 revs, so you don’t have to tap-dance on the gears as much to make swift progress.
If you want to swap cogs quickly, the addition of the hydraulic clutch with a stronger spring is still light enough with good feel and engagement.
Within a few corners I’m firing it up to a late corner entry with a fistful of late braking and a couple of downshifts. This pulls it up very effectively even though there is only a single disc up front.
Then you turn it into the corner, arc wide and get on the gas to fire it back out again.
Soon we are stringing together a series of bends in quick time and enjoying the challenge.
While the 110 engine pulls from much lower, it also has a heady top end and responds nicely to stacks of revs, something we don’t normal expect from the big Harley V-twins.
And more importantly the Screamin’ Eagle air filter and pipes make a gloriously legal baritone rumble through the hills.
There’s also very little engine mechanical noise to interrupt the dulcet tones of the sucking and blowing process.
Cruising through the northern NSW can fields, the Fat Boy S seems right at home. You sit so low in the seat you feel like you are in the bike – at one with it – rather than riding on it.
On short highway stretches I switch on the cruise control conveniently located on the left switch block and it works just fine with no lag and a very positive feel when you increase or decrease the speed settings.
Cruise control is made possible by the introduction of fly-by-wire throttle which is nicely attenuated for plenty of feel and smoothness off idle which makes feet-up tight u-turns very manageable.
The electric throttle now on all Softails also allows Harley to fit its Electronic Engine Idle Temperature Management System (EITMS) from the Touring models which turns off the rear cylinder when the bike is stopped. It helps to keep you cooler on hot days.
It’s enabled and disabled using the throttle grip. Pushing the throttle forward with the ignition on for three seconds will change this status. The cruise control lamp will flash green for enabled and red for disabled.
Even though it’s running on one cylinder, it’s balanced so it doesn’t vibrate any more than when both are working.
Styling is virtually unchanged and those iconic solid, bullet-hole disc wheels are not only striking, but extremely easy to clean. 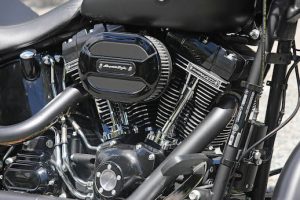 The Fat Boy S comes in black denim (matt black) and vivid black (gloss) only. But that’s just fine with most Fat Boy lovers who only like black because there is no darker colour.
And you’re surrounded by darkness with a blacked-out engine and gloss black lower forks, axle nut covers, handlebar and riser, brake lever and hydraulic clutch assembly, and shotgun exhaust with slash cut mufflers.
It looks low and mean and now the Fat Boy S has all the grunt to go with its bad-boy facade.